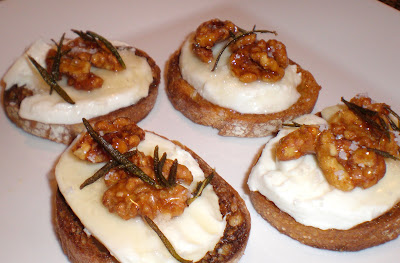 Slice the baguette to have 20 half inch thick slices. Brush each side lightly with olive oil. Place onto cookie sheet. Dust each one with garlic powder. Toast each side under the oven broiler until golden brown. Remove and let cool.

Pat dry with a paper towel each mozzarella ball. Slice the fresh mozzarella into 20, approximately one third inch thick slices.

The candied walnuts can be purchased already prepared from Trader Joe’s or you can candy at home. To candy the walnuts, place in a large skillet with about 1/3 cup of sugar and ½ teaspoon of salt. On medium heat, toss the mixture together and watch carefully until the sugar begins to dissolve. The process goes quickly. Once the sugar is dissolved and a caramel color is present, place onto a cookie sheet or large plate to cool. You can also simply toast the walnuts in the oven at 350 for about 6 to 8 minutes to develop that rich flavor.

For the fried rosemary, place about 2 tablespoons of olive oil in a small skillet over medium heat. When hot, place the rosemary leaves into the oil. Stir them around and fry for one or two minutes. Remove with a slotted spoon onto a paper towel to drain.