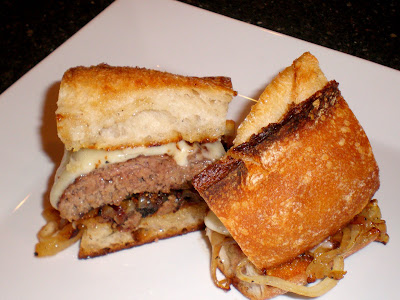 Inspiration is that unconscious burst of creativity that hits you at various times and comes in many forms.

My husband, Charles and I were watching Check Please Bay Area this morning and one of the restaurants being reviewed was Mama’s on Washington Square in San Francisco. One of the highlights was the “Slim Joe Burger” which is served with grilled onions, ketchup, and jack cheese on a sourdough baguette. Our mouths instantly began to water and we had not yet had breakfast, just our first cup of coffee of the morning.

After work last night, I stopped by Trader Joe’s to pick up a few things for the weekend, which turned out to be four stuffed bags that I brought home. (okay- I shop like tomorrow is the end of the world, but what if inspiration comes over me, I want to have ingredients - silly huh?) It is suppose to storm over the weekend and I wanted some comfort food to enjoy. Contained within the four large bags was ground beef, a fresh sourdough loaf and jarlsburg deli slices. Leaning over to Charles, I asked him – how would you feel about having patty melts for breakfast? His eyes immediately lit up and replyed with a resounding – YES!

I popped off the couch and created our patty melts for breakfast. A bit unconventional, but who says you always have to have breakfast food for breakfast.

Divide the ground beef into four even portions and form into patties. Season with salt and pepper.

In a large skillet, melt 4 tablespoons of butter on medium heat. Be careful not to burn. Add the sliced onions along with salt and pepper. Using thongs, coat the onions with the melted butter and cook on medium until golden brown. Toss frequently for evening cooking. Should be about 10 to 15 minutes. Turn off heat.

Cut the sourdough loaf into four pieces and then cut in half. Use a griddle and melt the 2 tablespoons of butter, then coat each of the bread slices with the melted butter. Grill the bread until golden brown and soft to the touch. Remove. Add the patties to the griddle and cook on medium heat for about 5 to 7 minutes per side until desired doneness is obtained. When you flip the burgers, add the cheese to ensure it is melted.

When ready to assemble, divide the caramelized onions to the bottom of the four breads. Add the burger and then the top. Add either ketchup or mustard for additional seasoning as desired.