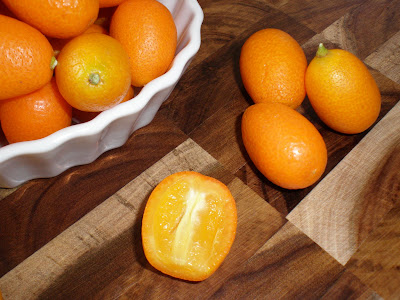 Kumquats are a curious little fruit. Almost like an oversized orange for a Barbie doll. They are often eaten raw and have a sweet rind and a juicy center which is sour and salty. These little gems are considered ripe when they reach a yellowish-orange color and just a slight hint of green. It is native to south Asian and the Asia Pacific and symbolizes good luck in China and other Asian countries. Often used to make kumquat preserves, marmalade or jelly, but also can be sliced and added to salads. Great to garnish a cocktail or made into a liqueur.

I found pints of these tiny treasures at Trader Joe’s and have always wanted to make kumquat marmalade and 2010 is the year. Typically a couple times a month I will whip up a batch of scones and enjoy orange marmalade with them. My first batch of marmalade is ready for scones this weekend. 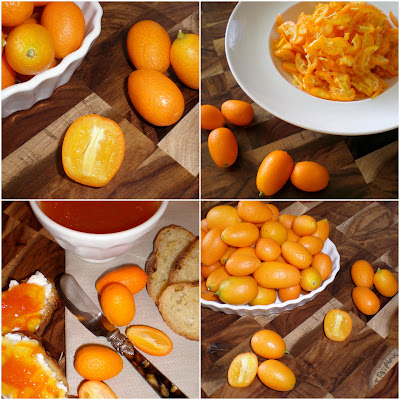 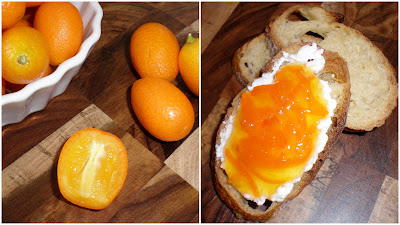 Cut the kumquats in half lengthwise and remove the seeds. Then use a sharp chef’s knife and cut into thin slices. Add the prepared kumquats to a heavy non-reactive pot, lemon juice and zest along with the water. Over the pan, and simmer for 25 minutes until the fruit is soft and tender.

Add the sugar, and stir over low heat until the sugar has dissolved. Turn the heat up and cook at a full rolling boil for 5 minutes and test for a set. When the marmalade has reached the setting point, ladle into hot sterilized jars, seal and label.
Posted by Lisa | Authentic Suburban Gourmet at 4:26 AM