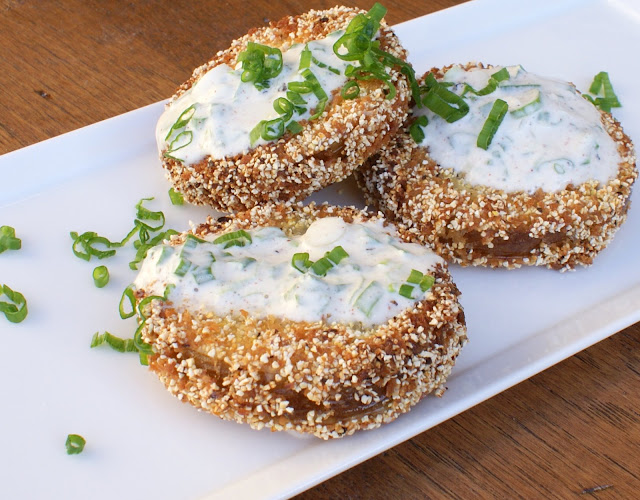 Two things come to mind when I hear Fried Green Tomatoes – the movie and the south. Inspired by the book, Fried Green Tomatoes at the Whistle Stop Café by Fannie Flag, the 1991 comedy-drama film was born. The premise is about a housewife who is unhappy with her life becomes friends with an old lady in a nursing home and is captivated by the tales she tells of people she used to know. 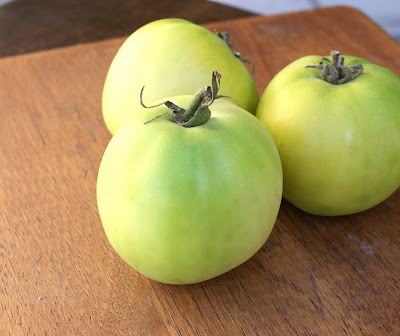 Alternatively I associate fried green tomatoes as a time-honored southern dish. End of harvest tomatoes which are unripened are turned into crispy fried bites of goodness. They are customarily dipped in egg, coated in a mixture of cornmeal and flour then fried golden brown and sprinkled with salt. The process of frying brings out a hint of sweetness, and they become tart and tangy. The flavor is distinct and when mixed with the crispy fried breading it is very appealing and unique. 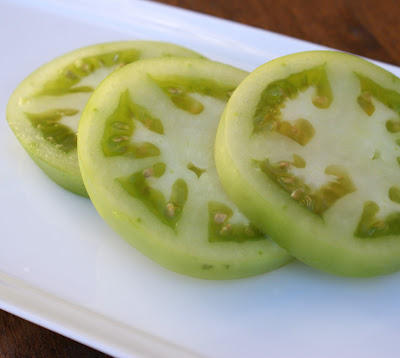 Since viewing the film several years ago, I have long been fascinated by these green fried disks of southern hospitality. Being a bay area native and resident, fried green tomatoes are not as prevalent as they are in the south region of the country. There is a relatively new dining destination in downtown Oakland called Pican which is a taste of the south in the bay area. I took a client out to lunch there a few months ago and saw the fried green tomatoes on the menu. This was a must try. They were crispy, sweet yet tangy and the sauce was a Cajun spicy buttermilk sauce. I knew that this would be on the list of items to recreate my own way. 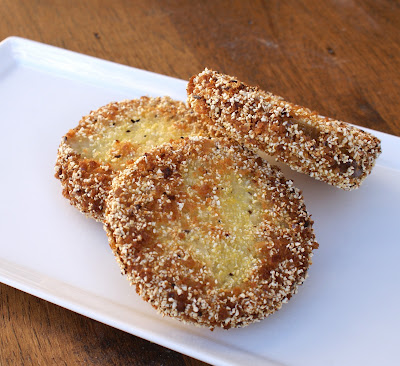 I decided that I wanted a distinct crunch so I used polenta instead of the traditional cornmeal. While at the farmers market, one of the vendors had an entire bin of green tomatoes and it was sign that I need to finally make my version of fried green tomatoes. After a bit of experimentation, I came up with a recipe that was perfect. My husband and I enjoyed them on Halloween night while answering the door with the little trick or treaters. 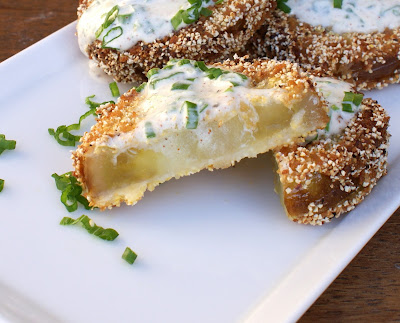 Slice the tomatoes into ½ inch slices. Set aside. In the first bowl add the milk and eggs together and whisk. In the second bowl, add the flour. In the third bowl, add the polenta, panko, salt, pepper and garlic powder and mix.

In a large skillet, add about ½ inch to one inch of canola oil and heat on medium. Place tomatoes into the frying pan in batches of 4 or 5, depending on the size of your skillet. Be careful to not crowd the tomatoes, they should not touch each other. When the tomatoes are browned, flip and fry them on the other side. Drain them on paper towels. Immediately sprinkle salt on each one.

¼ C. Buttermilk
1/3 C. Mayonnaise
½ t. Cayenne pepper (add more if you like it spicy)
1 t. Fresh lemon juice
Salt and pepper to taste
4 Scallions, trimmed and sliced thin, both green and white (reserve a bit to sprinkle on top)

Add all of the above ingredients in a bowl and mix well. Either serve on top of the fried green tomatoes or serve on the side.

Posted by Lisa | Authentic Suburban Gourmet at 10:08 AM