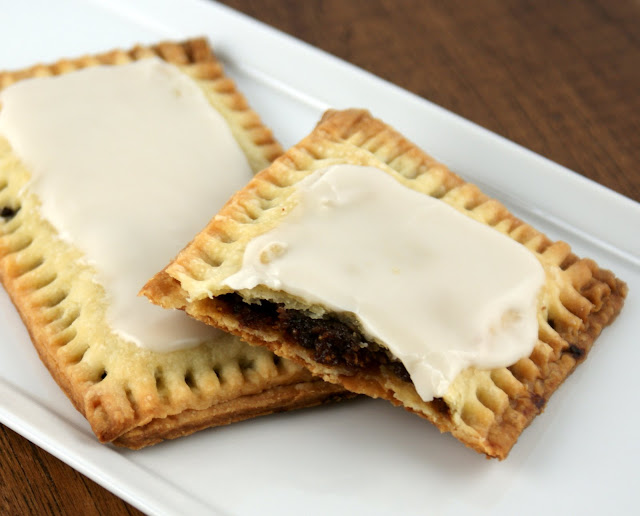 My obsession with figs continues. For the longest time I have wanted to make homemade pop-tarts. It is all the rage on the food blogs now with a variety of flavors, versions and adaptations. Thought I would throw my version out into the blog-sphere. And of course, they have a fig filling. I used the fig filling that I made the Sour Cream Fig Sprials but you could use any jam flavor you like. 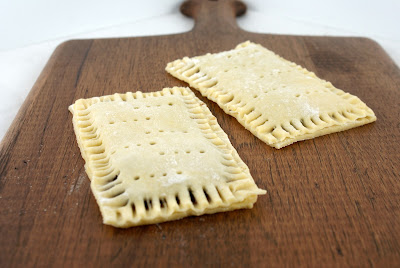 My hubby is obsessed with pop-tarts. He absolutely loves them, especially if they are the frosted variety. If I am heading for a Target run and ask him if he needs anything – sure enough pop-tarts are on the request list. If I run to Trader Joe’s, they are on the list – he especially loves their version. I mentioned that I was making homemade pop-tarts and his eyes lit up like a Christmas tree. He absolutely loved them and asked when I can make them again – great compliment. 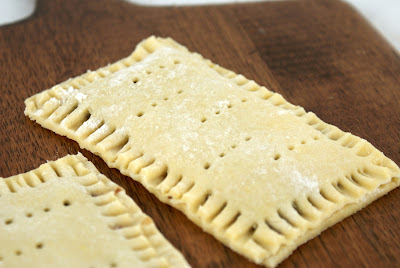 The official pop-tart was introduced in 1964 without frosting, but later the frosting was added since it could withstand the heat from the toaster. The frosted version was introduced in 1967 and originally came in four flavors: strawberry, brown sugar, cinnamon, and apple currant. Today the flavors seem endless.

Earlier in the week, I had the baking bug and made these delightful pop-tarts after work. Several hours later, it was time for the 10:00 news and I was just finishing frosting the last batch. I enjoyed one while watching the news – how bad was it that I ate this so late at night – oh well, a treat every once in a while is okay. 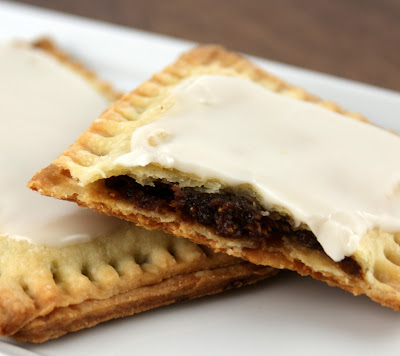 The next day, I brought one for each of my team members at one of my offices to enjoy during our morning meeting. Some loved the filling, some loved the crust and others could not get enough of the frosting. It was priceless to see the expressions on each person’s face when they saw they were homemade pop-tarts. Glad I could put a smile on everyone’s face and start the day with a treat. 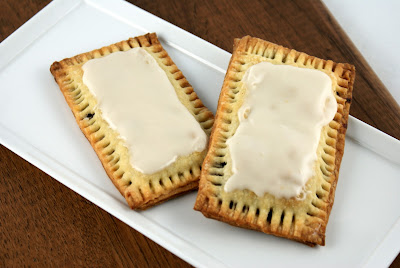 Use a food processor, combine the flour and sugar. Add the butter pieces and process until the mixture is crumbly. Lightly beat the eggs and add to the mixture and pulse until combined. Then stream the ice water into the processor and continue to process until the dough holds together. Remove and divide the dough into two balls and flatten. Wrap with plastic wrap and chill in the refrigerator for at least one hour.

Use a large cutting board and generously flour. Lay one of the disks on the floured board. Place plastic wrap on top and begin to roll out to a thin sheet of dough. You will want to rotate the dough after a few rolls with the rolling pin.

Each pop-tart rectangle will be 3 ½ inches by 4 ½ inches approximately.

Each pop-tart will take two pastry squares. Lay one square on the cookie sheet lined with parchment paper or a silpat. Place about 2 teaspoons of the fig spread in the middle. Carefully lay the top sheet of pastry on top. To seal, use a fork to press all around the pastry and dock the top of the pop-tart by poking 4 to 5 times with the fork.

Bake at 375 degrees for 15 minutes. Remove and let cool on a wire rack. Frost the top of each one and let harden before storing. Keep in an airtight container.

Put the figs, salt, pepper, orange zest, orange juice, honey and water in a medium sauce pan over medium heat. Cover the pan and bring to a boil and reduce the heat to low and simmer until the liquid is thick. About 30 minutes. Make sure the liquid doesn’t evaporate.

Remove from the heat and drain the liquid into a bowl. If needed, add water to the fig juice to total ¾ cup. Blend the figs and liquid in a food processor until smooth. Store in an airtight container.

Add to a medium bowl and mix well until any lumps are removed.