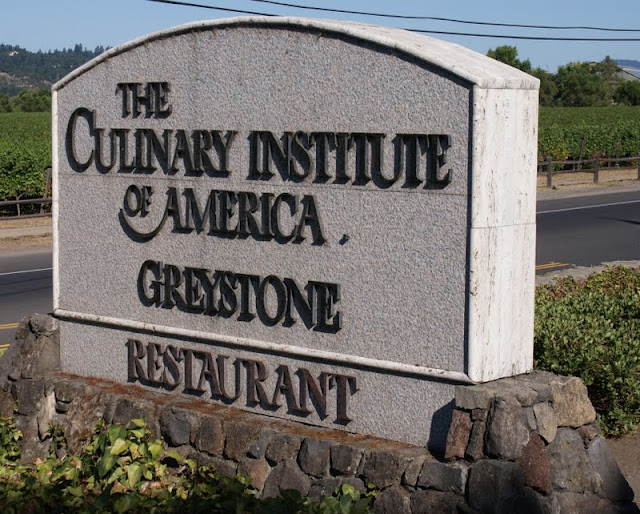 I completed one of my bucket list items last weekend – attending a class at the Culinary Institute of America at Greystone in St. Helena. Two fellow foodies joined me in this adventure – Patty from Patty’s Food and Monica from Wine Appreciation 101. It was an absolute perfect day whether wise with the sun shining and the temperature around 83 degrees. We enjoyed the afternoon in the Rudd Center, which is where students achieving their sommelier education learn. 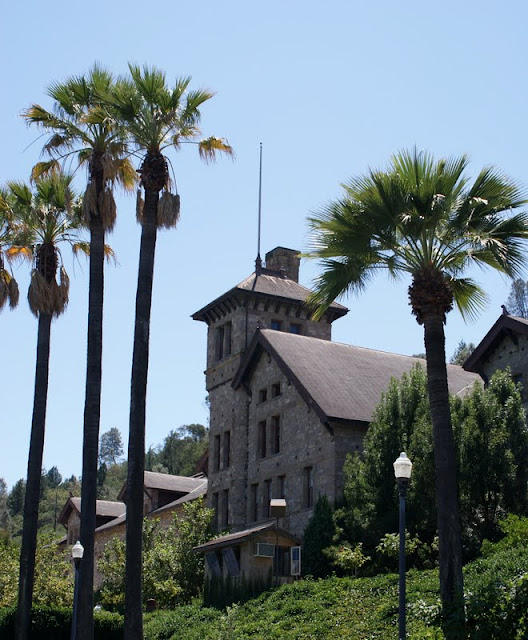 John Ash taught the class titled A Journey into Sensory Awareness: Food and Wine Pairing. John is a renowned chef, author, and food and wine educator. He is often referred to as the “Father of Wine Country Cuisine”. John is a pioneer for opening up the first restaurant in Northern California wine country to focus on local & seasonal ingredients to create dishes that pair with local regional wines. His namesake restaurant is John Ash & Company in Santa Rosa opened in 1980. 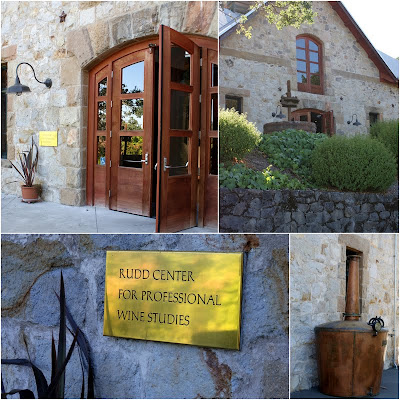 Our first item on the agenda was to have an “Aroma Challenge”. We broke into four teams and had eight glasses of wine in front of us – half white and half red. Our challenge was to only smell the wines to determine the prominent flavor in each wine. We had the aroma wheel to use as a guide. John enhanced the wines, so the aroma would be a bit more enhanced. Our team had much discussion around what was the hidden aroma. In the end, we did pretty well with identifying. A few were obvious and others were much more challenging. I highly encourage you to purchase an aroma wheel to learn more about the aroma profiles of the wines you buy. Who knows, one day you might just be a master sommelier. 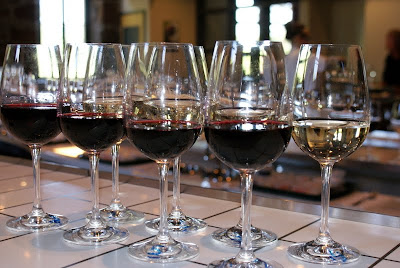 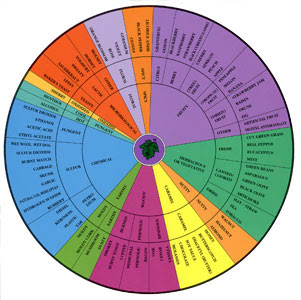 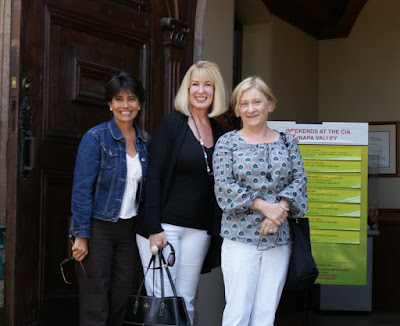 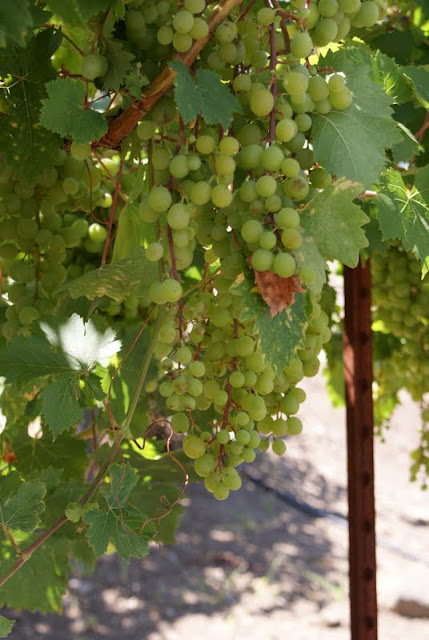 To simplify wine matching, think similarity and contrast. The first is similarity. You will want to look for the same or similar flavor notes in the food and wine. This strategy will elevate your entire tasting experience. A classic pairing that highlights the concept of similarity is goat cheese and Sauvignon Blanc. The like tones are fresh, crisp, acidic, and lemony and have an herbaceous quality. 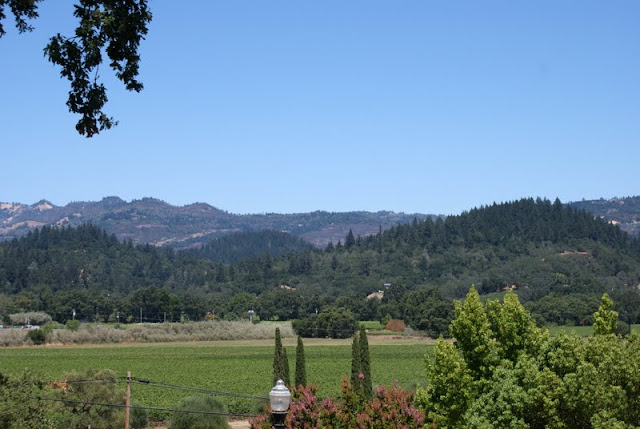 The age old saying, opposites attract displays the second concept of contrast. When the two combine, a whole new food and wine experience is created. Sometimes it creates that unexpected “wow factor”. A classic match is port wine with an English Stilton cheese. The rich, salty, creamy, mold infused cheese is matched perfectly with the sweet, syrupy alcoholic wine. The two together complete one another and create a balance that is remarkable. 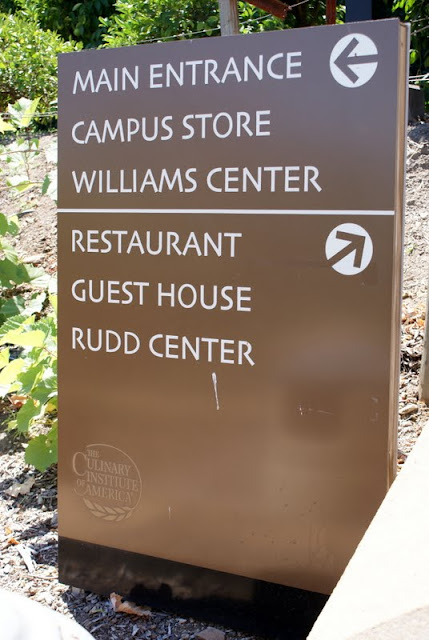 There are essentially six basic flavors according to John: Acidity, Sweetness, Saltiness, Bitterness, Pepper and Umami. These are the components of how we taste foods and are the key to how we match wine with foods using the similarity and contrast concepts. 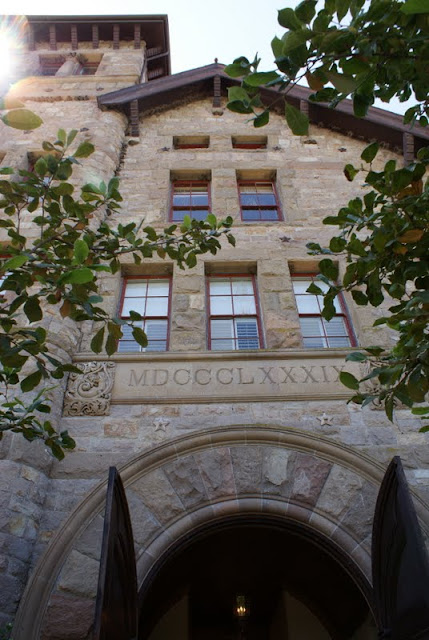 Acidity: Natural acids impart tartness or sourness in both food and wine which can be important to balance other tastes. Citrus or tomatoes are high in acid and are usually matched well with Sauvignon Blanc, Rieslings and Sparkling wines. If a food is strongly acidic or sour, it will also disturb the balance in a wine and make it taste sweet in comparison.

Saltiness: As foods become more salty, their own flavors have a tendency to increase and neutralize the acid, or sour tastes of the wine which creates an notion of less bitterness in the wine. A great example is to put a bit of salt on a tart apple – it will soften the sourness, making the apple taste milder and enhance the fruit flavors.

Bitterness: The bitter taste is found in such vegetables as radicchio, Arugula or endive. Young cabernets will often have more pronounced tannins which cause a bitter note. If you enjoy the bitter flavor, leave it alone. However, it you want to tone it down, add some sort of fat to your food - perhaps cream or butter. The fat will assist with bringing out the fruit in the wine and toning down the bitterness.

Pepper: John added this taste sensation to the normal five. I found it quite interesting and it made sense. As he says, foods with a high level of chili or pepper heat will benefit by having a wine that has a bit more sweetness. The wine will cool the pepper and create harmony.

Umami: Savory or umami in Japanese has gained acceptance by food scientists as the fifth taste. It is more prevalent in Asian cuisines and tends to bring out bitter and often metallic tastes in wine, although the effect can be annulled by saltiness. 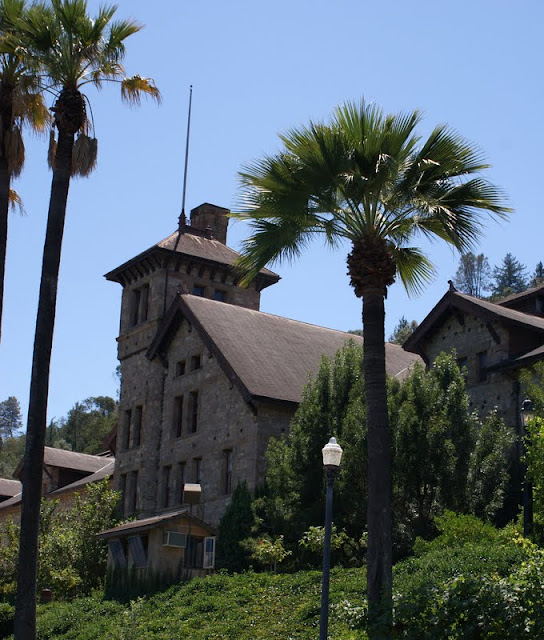 It was now time to bring all of the concepts in concert and match the food and wine together. Five wonderful wines were sitting in front of us along with seventeen food elements ranging from soy sauce, salt, and avocado to smoke salmon. The wines were carefully selected for the matching of foods. 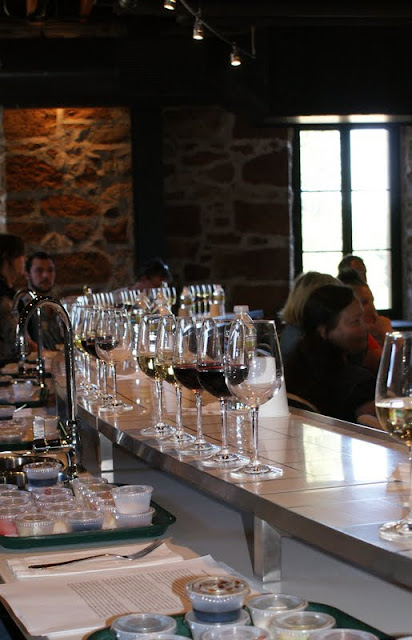 We began with a 2010 Sauvignon Blanc from Kim Crawford from the Marlborough Region in New Zealand. This is actually one of my favorite Sauvignon Blanc wines. It is crisp yet powerful with aromas of grapefruit, citrus, passion fruit and herbaceous. We tried it with the classic pairing of goat cheese – a marriage made in heaven. Next was the avocado plain – good but sort of boring. Adding additional flavors with salt and a bit of lemon juice, the pairing was off the chart delicious. The layering of flavors changed the profile of the wine by toning down the acidity. 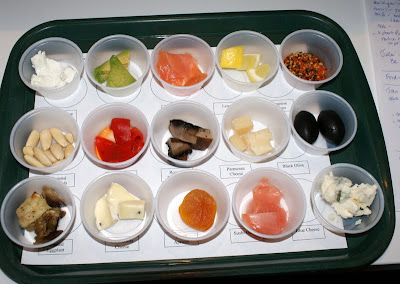 The second wine was a beautiful Chardonnay down the street from the Culinary Institute, from Stonestreet Winery. It is a 2007 single vineyard Chardonnay from Alexander Valley with a bright yellow straw color. Flavor notes of lime, tropical fruits, apple, pear, peach and snap pea. It was a rich mouthful wine with plenty of oak and vibrancy. To demonstrate the similarity, we paired with lightly toasted almonds and for the contrast were roasted red bell peppers. The bell peppers brought out the fruit in the wine. If you combined the two foods to create a brilliant romesco sauce over pasta and enjoyed the wine, you would have a terrific match. 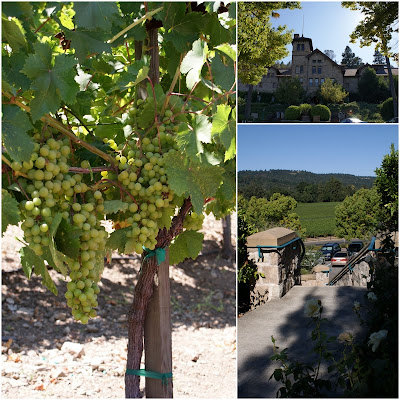 The third wine was a Pinot Noir from Domaine Drouhin in Oregon’s Willamette Valley. The flavor profile on this wine exploded for me with many aromatics including: rose petals, violets, spices, leather and wild blackberries. This wine is a new world wine with very earthy and forest floor qualities – that is a good thing. We first tasted the similar food, roasted Portobello mushrooms and were a natural match. I could just imagine a wild mushroom tart with this wine – can you say “epiphany pairing”. The contrast match was aged parmesan cheese. With the salty quality and rich flavors, the wine was perfect. 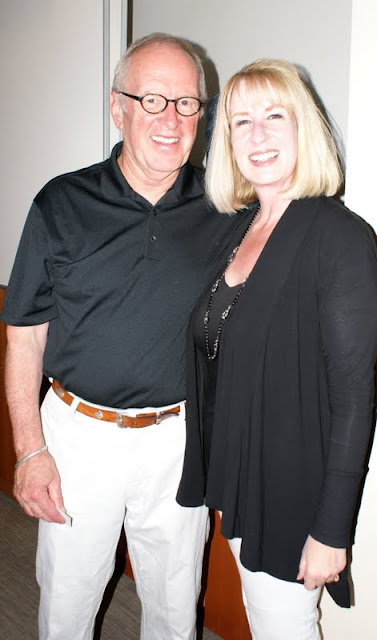 Our fourth wine was a classic Cabernet Sauvignon from Louis Martini. This 2007 Reserve Cabernet Sauvignon from Napa is created using traditional Bordeaux-style techniques, and aged in French and American oak for over two years. This wine has aromas of cherry, blackberry and currant with some hints of sandalwood and an herbaceous note. It is luscious, silky and full of concentrated fruit. We tried it with large black olives for a similarity in pairing along with roasted eggplant. Both complimented the wine beautifully. Our contract match was cambozola cheese which softened the fruit and enhanced the wood tones. For me, this was a stunning pairing. 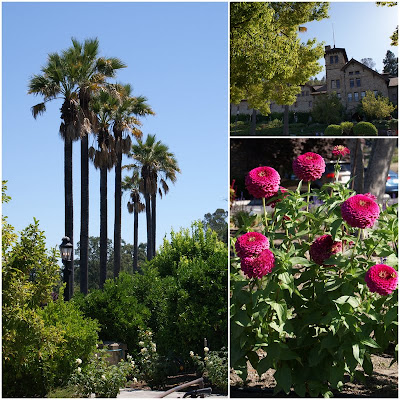 Our final wine was a 2008 Riesling from the Red Tail Ridge Winery from the Fingerlakes Region in New York. Yes, I said New York! It was very aromatic with fresh flowers and apricots flavors. We tried it with dried apricots first to demonstrate the similarity concept. Next was a contrast of sushi ginger where the wine cools the heat of the ginger. Finally, a Point Reyes blue cheese was paired and it brought out the terroir of the cheese and gave smoothness to the entire tasting experience. 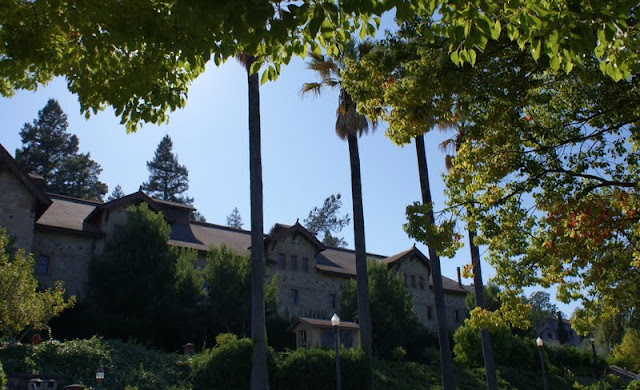 Our nose is the connector to many memories. It is fascinating how smelling a bowl of popcorn will bring me right back to my childhood and going to the drive in movies with my family. I am sure that you can think of a scent that catapults you right back to a great memory. Julia Child always said to be joyful for food and wine – I could not agree with her more. John gave us some really wonderful advice for enhancing our senses with food. By incorporating at least three of the six basic flavors in every dish you make, the flavors will jump off the plate. 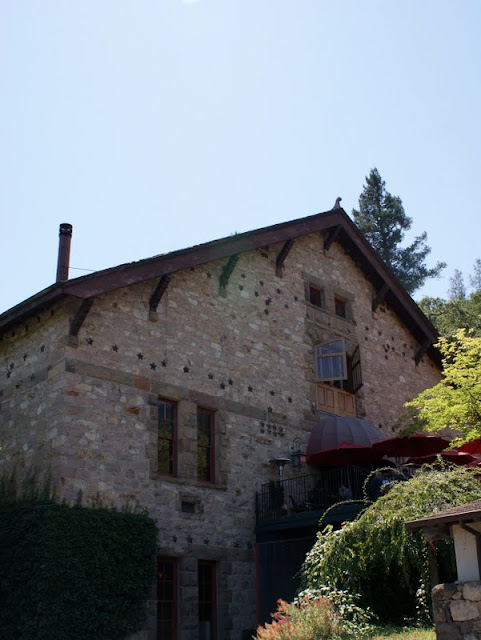 John shared a story that collaborates his minimum three basic flavor rule. He inherited the cooking gene from his Grandmother. She would make the best apple pie according to John. He secret was using at least three of the basic flavors. She would use sweet apples, unsweetened pie dough that had apple cider vinegar, use 3 to 4 grinds of pepper on the bottom of the crust and top with cheddar cheese when finished baking. His grandmother had sweet (apples), acid (apple cider vinegar), pepper (fresh ground pepper) and umame (cheddar cheese). 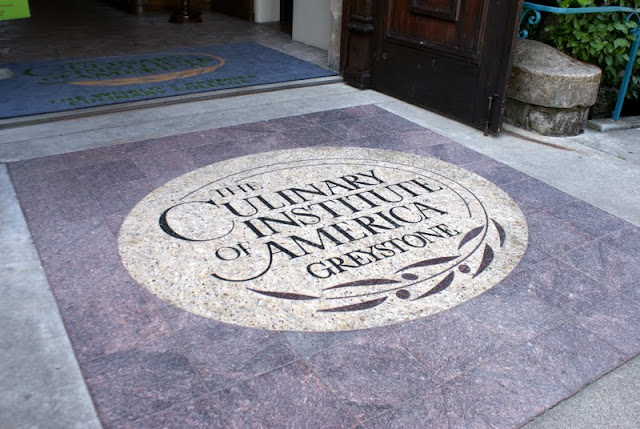 Like all good things, this wonderfully fun and informative class had to come to an end. But with all good things, they can often be repeated. I know that I will be back to take additional classes at the Culinary Institute of America. Give some of these wines and/or food matches a try and see if you have a food epiphany.

Email ThisBlogThis!Share to TwitterShare to FacebookShare to Pinterest
Labels: Events