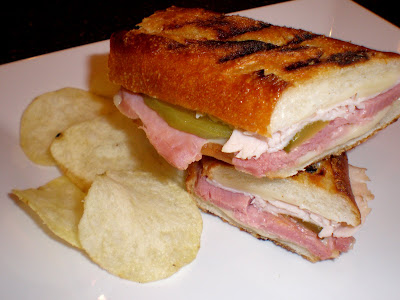 I had a lot of leftover ham from Easter and traditionally always make navy bean soup, and probably still will. My experimental side came out and for such a long time, I have been curious about the Cuban sandwich. The flavors all sound so wonderful. I decided to substitute the traditional pork for the turkey. Using a baguette adds a bit of flair along with an easy way to eat the sandwich.

After digging through my pantry for my Mario Batali panini press, I started cooking the sandwiches and the smell was out of this world. After taking one bite, the key to the deliciousness is the dill pickle. Between the crispy crunch, salty ham and the melted swiss cheese, this is one incredible sandwich that I highly recommend you try.

Preheat a griddle or panini press on medium heat.

Cut the baguette into quarters and slice each quarter in half lengthwise for the sandwiches.

Make each sandwich by layering the cheese on each side then top one side with ham and the other with turkey and add the pickles. Place both sides together and brush with olive oil.

Place one sandwich onto the hot surface. Put a clean, heavy skillet on top of the sandwich to flatten it. Press the bread down to about 1/3 of its original size. If you use a panini press, the heavy skillet option is removed. Turn the sandwiches after 2 to 3 minutes. The cheese should be melted and the bread is golden brown. Slice each sandwich in half diagonally and serve.