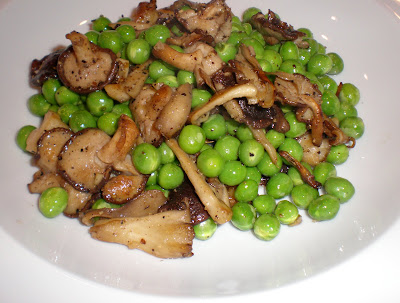 From the farm to the farmers market to the table – that was how this particular dish made it on the blog. Our city added a second farmers market during the weekend, so that one is on Saturday and the other is on Sunday. Luckily for me, the one added on a Saturday is super close to my house. My husband and I ventured down there early last Saturday to see what goodie we could find. One mission I had was to procure fava beans for the appetizer I was making that evening. Fortunately I found one vendor who had some terrific looking ones and the bag was abounding with beans. Another little treasure that I found were pre-shelled English peas from Swank Farms, which eaten raw are like candy.

At the farmers market in the Ferry Building in San Francisco, one of my favorite places to go is Far West Fungi where you can purchase all of the typical and exotic mushrooms. Especially in the fall, when chanterelles are in season, I will always pick up a couple baskets. To my surprise this particular vendor was at the market on Saturday. I saw that she had fresh morel mushrooms in the back of the truck but to my dismay, the couple in front of us purchased the last two baskets. Oh darn! Being a person with an open mind, I thought this is my opportunity to try new varietals of mushroom. Jumping out at me was the Miatake mushroom.

The miatake mushroom is commonly known among folks in the united states as Hen of the Woods, Ram's Head and Sheep's Head. In the United States' supplement market, as well as in Asian grocery stores, the mushroom is known by its Japanese name "Maitake", which translates to "dancing mushroom". This mushroom has been used in traditional Chinese medicine to enhance the immune system. Researchers have also indicated that whole maitake has the ability to regulate blood pressure, glucose, insulin, and may also be useful for weight loss. Who knew a mushroom could be so good for you. 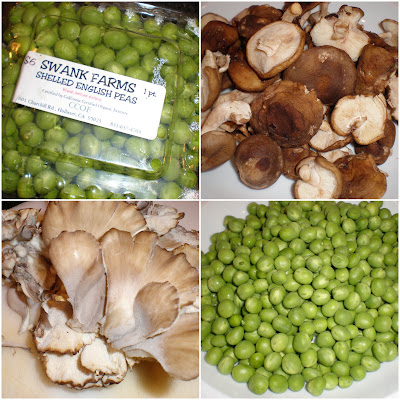 Break apart the miatake mushroom and rough chop the remainder. Trim the stems from the baby shitakes. In a large skillet, add the butter and olive oil. Heat on medium until butter melts. Add the mushrooms and season with salt and pepper. Cook over medium until browned and cooked through. Add the garlic and peas. Cook for another 2 to 3 minutes. Taste for seasoning and adjust as desired. Serve immediately.
Posted by Lisa | Authentic Suburban Gourmet at 7:47 PM

Email ThisBlogThis!Share to TwitterShare to FacebookShare to Pinterest
Labels: Side Dishes, vegetarian