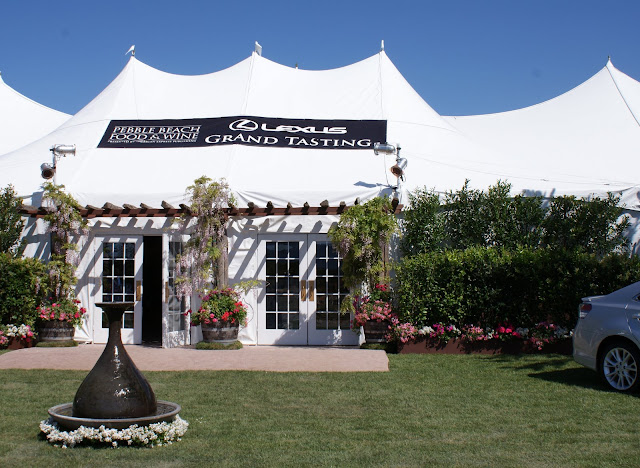 Over the weekend I had a perfect foodie day. I attended the Fourth Annual Pebble Beach Food and Wine extravaganza. The weather was perfect. The line up of chefs, wineries and venue was perfect. The friends I enjoyed the day with were perfect. 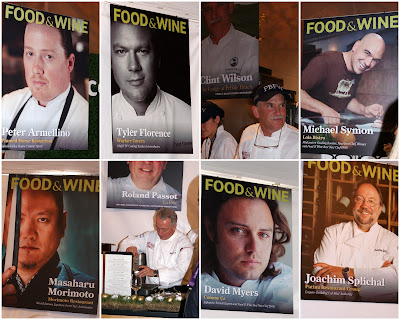 When I received the invitation from Liren at Kitchen Confidante to attend the Pebble Beach Food and Wine event, I was delighted. Soon after, I received an email  from Jean at Lemon and Anchovies letting me know that she was attending too. I was overwhelmed with the out pour of friendship and thoughtfulness. It was soon official – we would all be attending the event. Hopefully we would catch up with other Bay Area Bloggers. 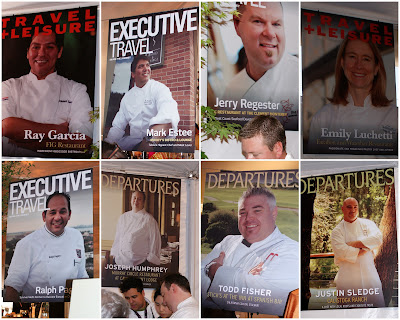 Liren was kind enough to drive to the event. It was a great opportunity to chat about everything from family, careers to of course everything food. We arrived early to the Grand Tasting and were among the first guests in line. Jean joined us shortly and even brought some tasty snacks for us to enjoy while waiting for that magical noon hour.

With our cameras in toe around our necks, we finally entered the colossal tent. They actually sectioned it into “tent A” and “tent B”. We had three hours to eat, chat, taste and have fun. Within the food blogger sphere, you make many friends but don’t often actually get to meet them in person. I was lucky enough to meet Liren and Jean last year at a food blogger dinner. During the event we had the pleasure of meeting Sara from CaffeIna and Gina from SPCookieQueen. I was looking forward to meeting Azmina, who Jean invited from Laywer Love Lunch , so hopefully we will meet soon at another foodie event. 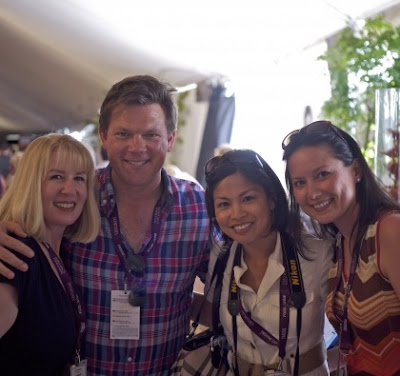 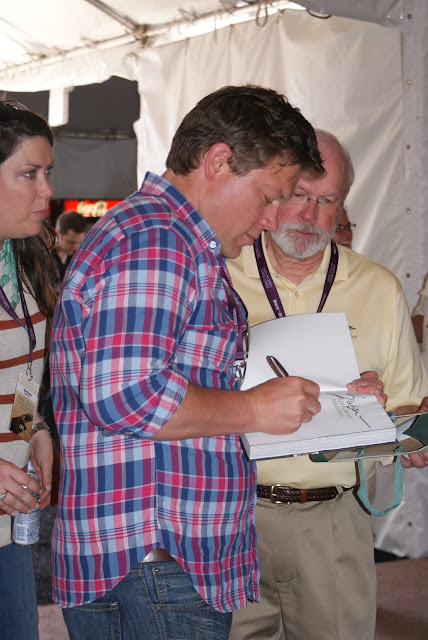 A true highlight for the day was meeting Tyler Florence. A relatively new Bay Area resident, he has made his mark with Wayfare Tavern in San Francisco. He was truly one of the kindest and most hospitable celebrity chefs at the event. If you have not dined there, I would highly recommend it. The fried chicken is the signature dish and is finger licking good. 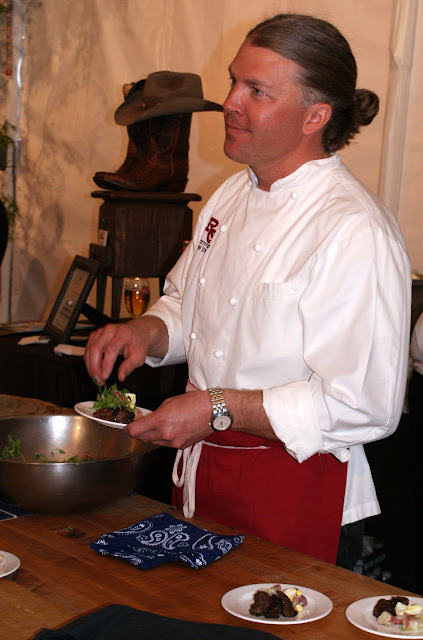 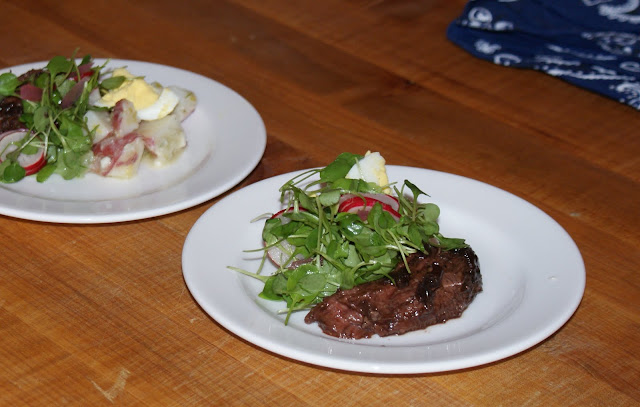 With cameras and wine glasses ready, we forged forward to taste the divine dish from Josh Drage from The Ranch at Rock Creek in Montana. He served a Grilled Bison with Mache salad, radish, red potatoes, egg and divine vinaigrette. His center of attention is with utilizing local producers of organic and sustainable meats and produce. His food is defining Montana cuisine. 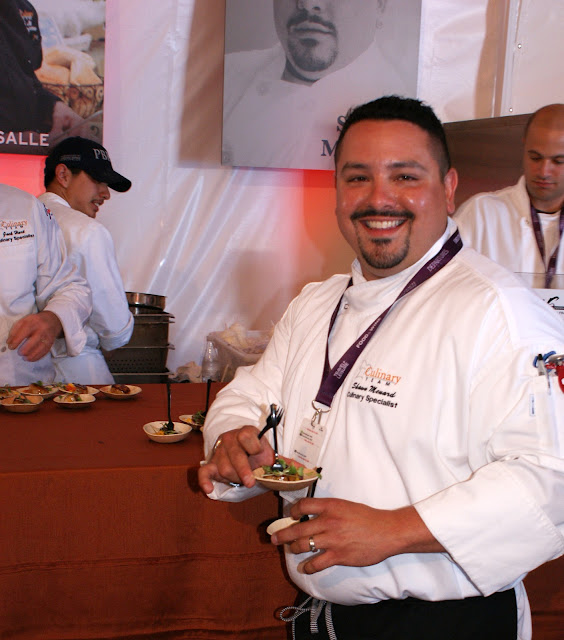 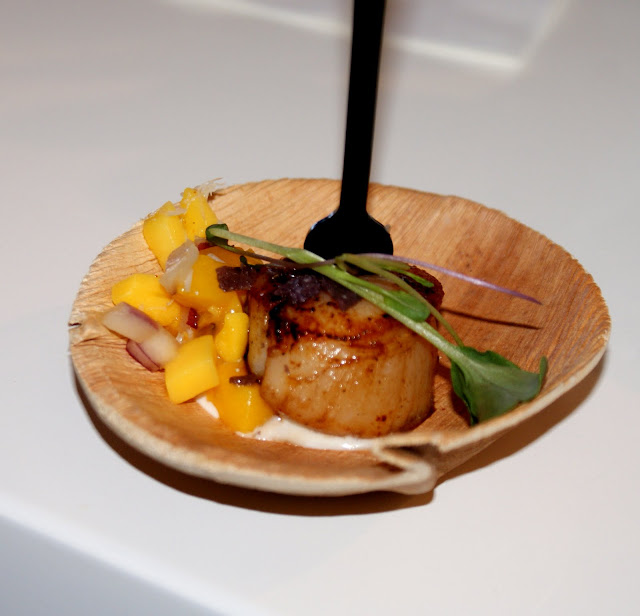 The culinary teams from US Food Service were full of personality and vibrancy. They made a wickedly delicious dish of Bronzed Eastern Sea Scallop with Mango Dungeness Crab Cerviche and Blue Corn Crisp. Believe it or not, I had steered away from Scallops for all of my adult life until now. They converted me to a Scallop lover! 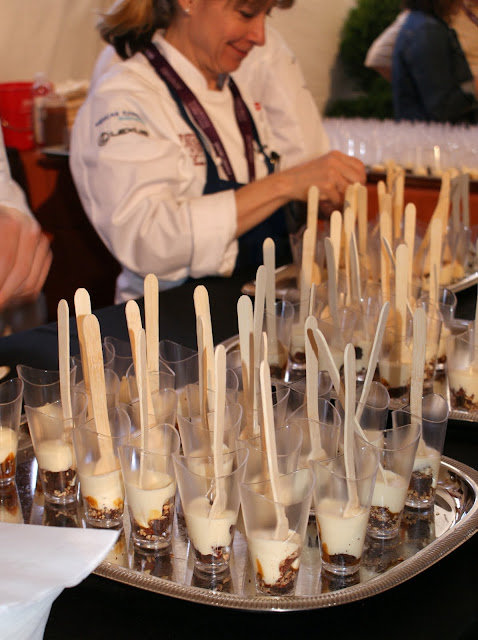 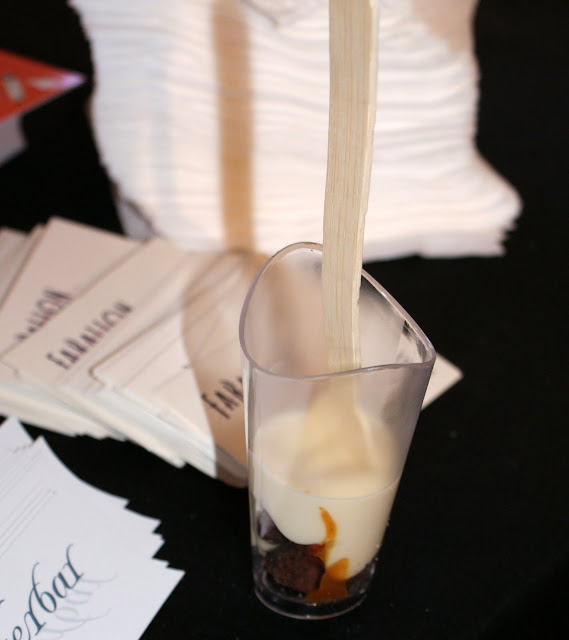 Emily Luchetti from Farallon made an absolutely incredible dessert – Brownie Brown Sugar Parfait. There was a chewy brownie, creamy custard, crunchy bits and layers of brown sugar goodness. Perfection created with just one spoonful. We all wished there were more dessert booths – hopefully for the fifth annual event. 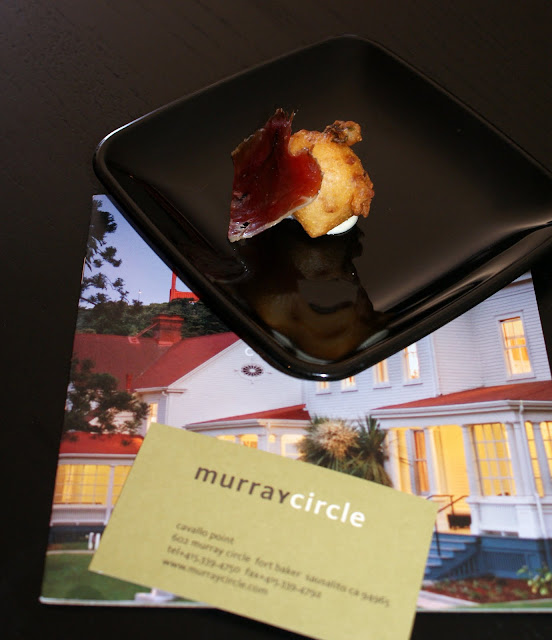 Joseph Humphrey from Murray’s Circle at Cavallo Point Lodge in San Francisco’s Fort Baker scenic setting which stares at the iconic Golden Gate Bridge was full of personality. He served a Duck Hush Puppy with Prosciutto and it was simply a bite of fried heaven. 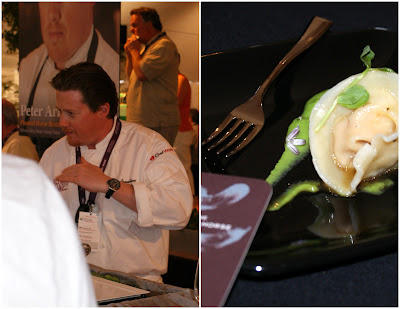 Not being familiar with The Plumed Horse located in Saratoga, I was elated when I tried the Foie Gras Ravioli with Truffled Pea Puree. Chef Peter Armellino is very deserving of receiving the Michelin Star in 2009, 2010 and 2011. As Michael Bauer from SF Chronicle says – “Plumed Horse is the standard for destination restaurants”. 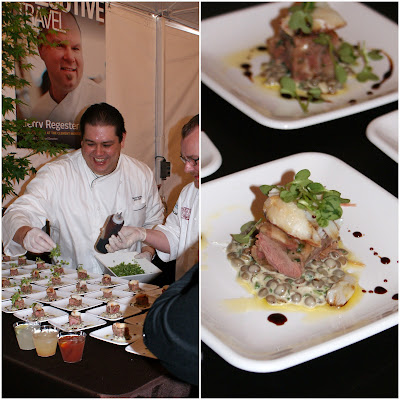 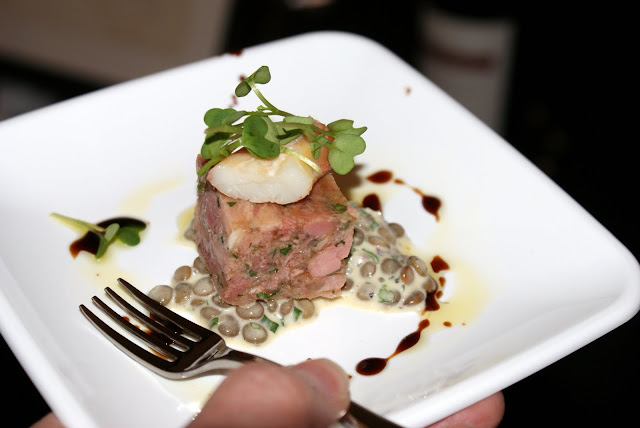 Chef Jerry Regester from The C Restaurant + Bar has spectacular views of the Monterey Bay. "We are committed to a seasonally-inspired cuisine - focusing on fresh, local and sustainable ingredients - that supports our local purveyors". said Chef Regester. He created a supreme dish – Pork Shank Terrine with Umbria Lentils and Dungness Crab. 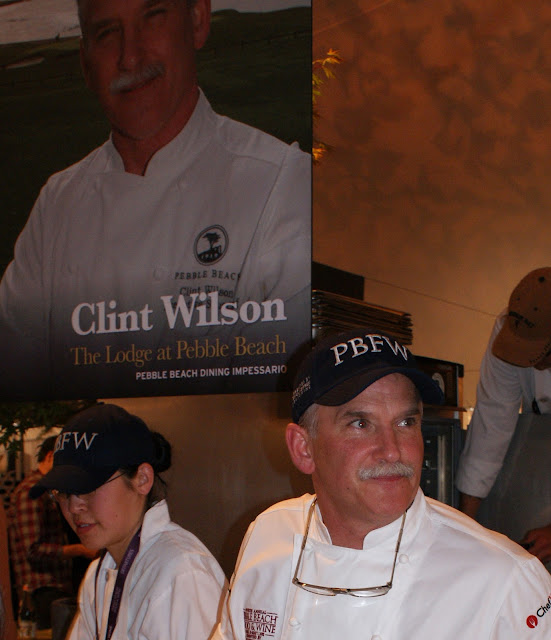 One of biggest thrills of the day was tasting the Popcorn Bisque from Chef Clint Wilson from The Lodge at Pebble Beach. First of all, Clint and his team were full of energy and had a zest for life. We could sense the moment we approached the booth, that they were proud of the bisque and enjoyed the positive surprise from each guest who tasted this heavenly soup. It was a creamy corn soup with butter and popcorn. Incredibily rich but we all gladly accepted a second shot glass from Chef Clint. 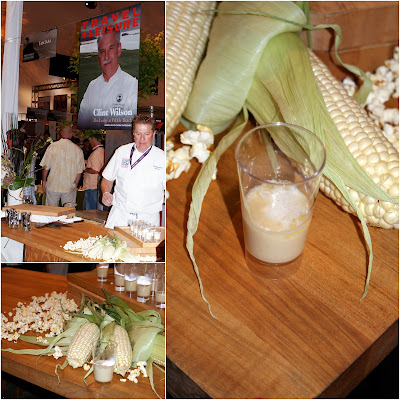 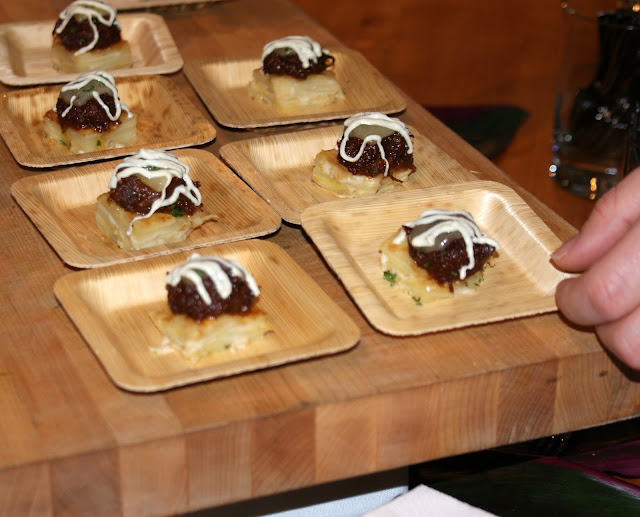 Not only did Chef Clint make an out of this world bisque, he delighted us with a Braised Buffalo Shortrib on top of a potato gratin. The combination was another stunner from Chef Clint. 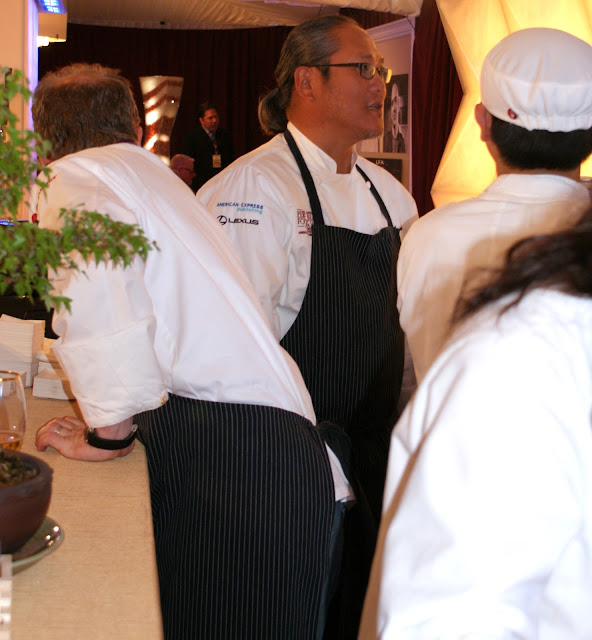 Masaharu Morimoto and his team created a one bite wonder – Angry Octopus, Meyer Lemon Cream with Pickled Kumquats. He recently opened Morimoto Napa and seamlessly integrates western and japanese ingredients to create culinary masterpeices. His team assembled the appetizers with such precision by using tweezers to garnish each one. 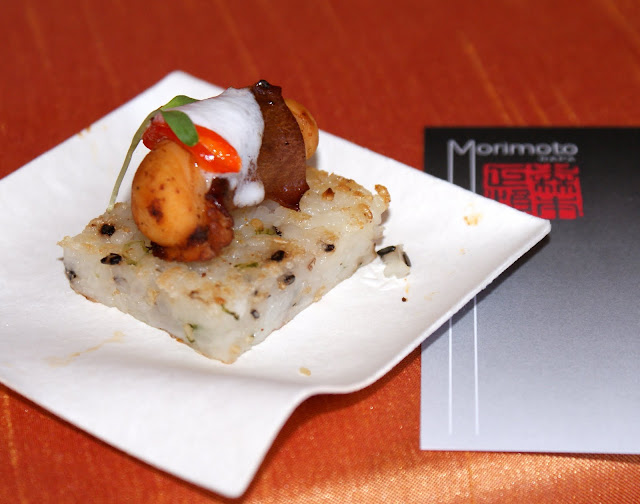 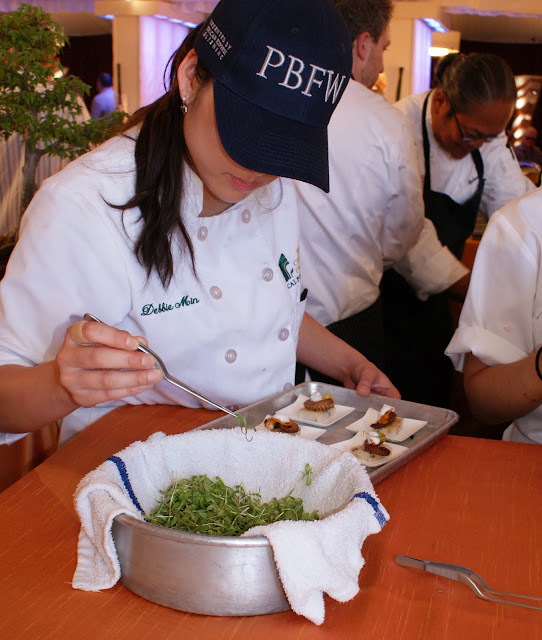 Who doesn’t love bacon? I personally do not know anyone. Ray Garcia from Fig Restaurant in Santa Monica certainly knew how to draw a crowd by serving “Bacon wrapped Bacon”. Thinly sliced smoked bacon is wrapped around slab smoked bacon and cooked slowly for about eight hours on low heat. The result is a crispy outside and a melt in your mouth inside. 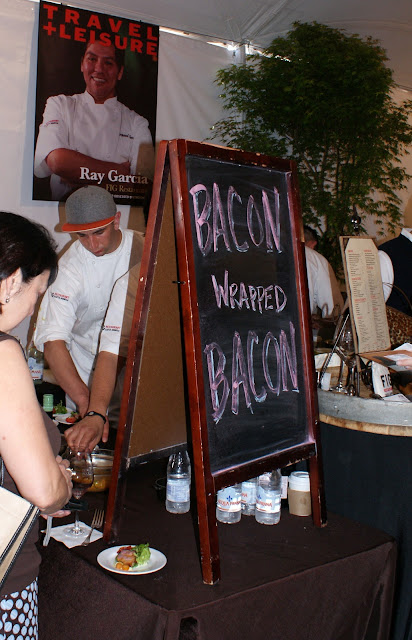 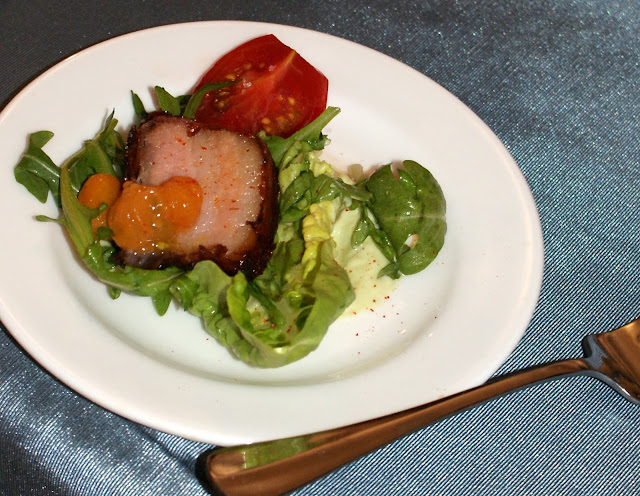 Moody’s Bistro and Lounge is located in Truckee on your way to Lake Tahoe and Executive Chef Mark Estee puts his spin on bistro classics with a culinary flair. He served an Artisan Head Cheese with Salad and Croutons. The pig adornments on the table caught your attention and gravitated us to his table. Chef Mark became emersed in the creation of his dish and shared his passion with us. 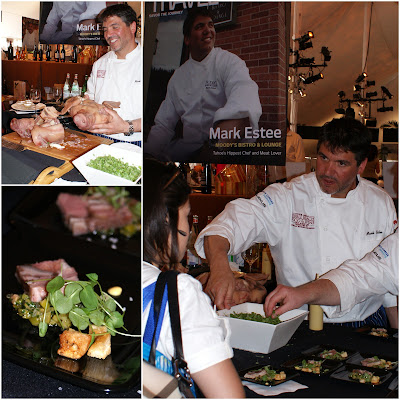 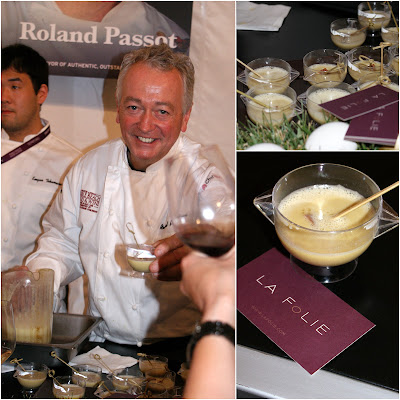 Restaurant 1833 in Monterey hired Levi Mezick as their executive chef.  He created a very light fish starter that appeared to be poached in olive oil and finished with fennel, pea puree and lemon verbena olive oil.  Pure decadence! 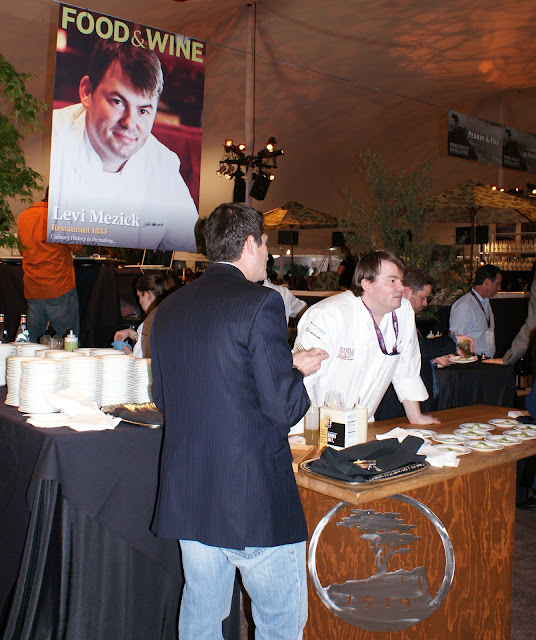 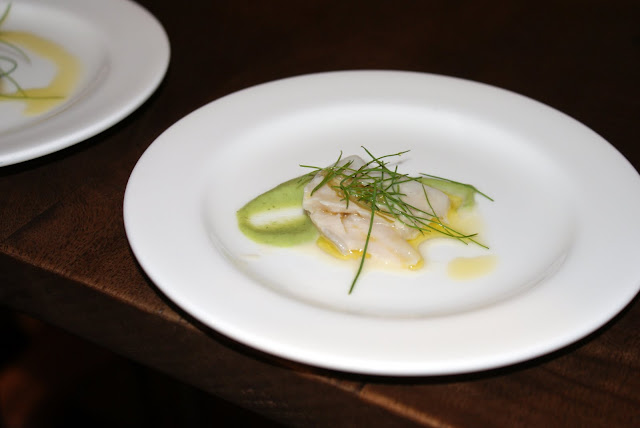 Michael Simon created a lamb mini meatball with yogurt and fennel and a bit of mint on top.  It was a delightful bite. 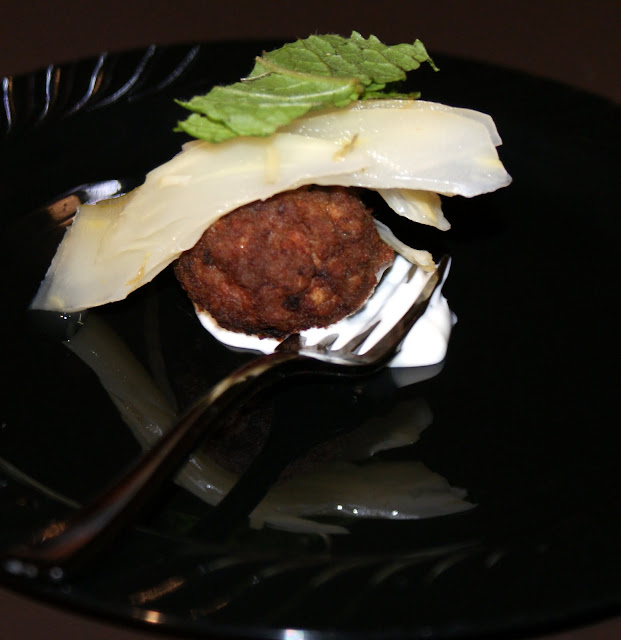 This must have been the quickest three hours of my life. I enjoyed great food, great wine and spent time with great foodie friends. You are probably wondering about all of the terrific wines – I have decided to dedicate a part two to just the wines at Pebble Beach Food & Wine. Stay tuned for part two in the next few days!

Posted by Lisa | Authentic Suburban Gourmet at 1:55 AM

Email ThisBlogThis!Share to TwitterShare to FacebookShare to Pinterest
Labels: Events