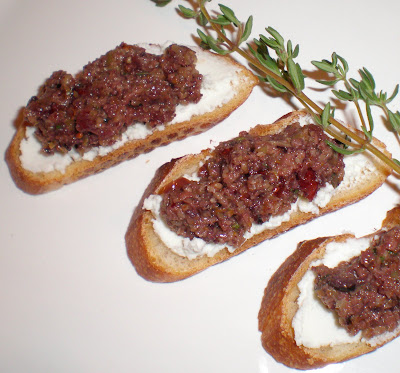 If you know me or read my blog regularly, you know that I adore appetizers – especially Crostini. Why do I love them so, is what you might be wondering. The answer is simple: they are straightforward, easy and an open canvass for hundreds of toppings. Over the weekend I created multiple Crostini and was inspired by various things: figs, cheese, herbs, and tapenade. I posted two other recipes this week and this is the final Crostini post for the week.

Each of you probably has a favorite Crostini recipe or a creative idea for a wonderful Crostini. Thought it would be fun to have a “Crostini Challenge”.

3. I will conduct a random drawing for Bruschetta: Crostini and Other Italian Snacks by Maxine Clark for one lucky winner based upon the total comments submitted.  Winner will be announced on August 8th or before.

4. Within a few weeks I will select my favorite entries, share my recreation and highlight in an upcoming post.

5. Look forward to everyone’s ideas and having fun with Crostini! 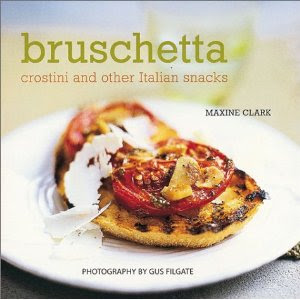 Preheat oven to 375°F. Make Crostini: Brush the bread slices on both sides with olive oil. Arrange the slices on a baking sheet and cook until the slices are golden brown, about 10-15 minutes.