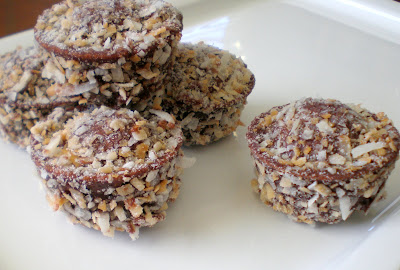 Lamingtons are a prototypical part of every Australian's childhood. This little sponge cake is dipped in chocolate icing and then rolled in desiccated coconut. Typically these little goodies are sold at local school fairs or bake sales. Sometimes you will see a Lamington split in half and layered with whip cream or strawberry jam. The raspberry jam variety is more recognized in New Zealand.

The Lamington is named after Charles Cochrane-Baillie, 2nd Baron Lamington who served as the Governor of Queensland from 1896 to 1901. According to history or legend, the Lamington’s chef Armand Gallad was given short notice to serve unexpected guests. He proceeded to cut up French vanilla sponge cake baked from the day prior, then dipped in chocolate and rolled in dried coconut. The Lamington guests quickly asked for the recipe and a classic Australian dessert was born.

I was first introduced to Lamington’s several years ago while at our local farmer’s market. Bake Sale Betty would attend each weekend farmer’s market in her blue wig, ironing boards strewn about with tasty treats from her homeland of Australia. Betty would give out samples of her delicious scones, cookies and Lamingtons. Once the word was out about the Lamington’s – you had to get there early or they would vanish quickly. When I asked her what they were – she replied with – they are like zingers.

I was pursuing through The Craft of Baking by Karen DeMasco and looking on page 166, there they were. These cute little Lamingtons were given a fun twist by Karen. Instead of the traditional square shape, she chose to bake them in mini muffin tins - brilliant. My first thought was to pipe in a bit of raspberry jam after they finished cooking, to kick them up a notch. I decided to make them according to the recipe, but next time, I am adding the raspberry jam for sure. I made a few slight changes to the recipe and figured out a few shortcuts that worked for me.

Spread the coconut on a baking sheet and bake until it's lightly golden, about 5 minutes. Remove from the oven and cool. Break up a bit with your hands and add to a bowl.

Increase the oven temperature to 350 F. Use a non-stick cooking spray to coat the mini muffin tins.

Beat the egg white to soft peaks in the electric mixer and then scrape into a bowl and set aside. Rinse this bowl quickly and then add the butter, granulated sugar and vanilla. Beat on medium high until light and fluffy – about 5 minutes. Scrape down the sides.

With the mixer on medium speed, add the milk and the flour, baking powder and salt alternating in three additions each scraping down the sides of the bowl as necessary to ensure that the mixture is well combined. Using a rubber spatula, scrape the batter into a large bowl.

Divide the batter among the muffin cups, filling the cups about three-quarters full. Be sure to not overfill them, otherwise they spill over the sides. Bake rotating the tin halfway through until the cupcakes are lightly golden and a tester inserted in the center of a cupcake comes out clean, about 20 minutes. Invert the cupcakes onto a wire rack, turn them top side up, and let them cool completely.

In a medium bowl, sift together the cocoa powder, confectioners' sugar and salt. Add 1/4 cup plus 3 Tbsp water and the vanilla, and whisk to combine.

Posted by Lisa | Authentic Suburban Gourmet at 4:22 AM